What’s under the bed and in the wardrobe? Who’s on the stair and what’s going on in the shed? Rachel Whiteread’s sculpture is both deadpan and affecting. It can be modest in scale and homely, grand and austere, mischievous, menacing. Her art is filled with safe spaces and frightening places, mystery and memories. All this from an artist who, since the late 1980s, has been almost entirely devoted to the making of casts. From filling a rubber hot-water bottle with liquid plaster and using it as a mould, Whiteread has gone on to cast sinks and baths and mattresses, the interior of a room in north London, then an entire East End house slated for demolition. She has cast library shelves and even one of New York’s ubiquitous rooftop water tanks. Looking up, the translucent cast of the tank’s interior presented a solidified, glinting void against the sky.

Some of her more recent casts of cabins and sheds have been permanently located in out-of-the way places, to be discovered by chance (just imagining them baking in the Mojave desert, or getting soaked in rainswept Norway, is itself a pleasure). Whiteread refers to some of her recent works as “shy sculptures”. Throughout her career, she has shuttled between complexity and simplicity, and between the small and close at hand, to fragments of the larger world – the vacant plinth on Trafalgar Square, a stairwell, a cast of the meeting room in Broadcasting House that inspired George Orwell’s Room 101, which is now installed in Whiteread’s complex and rewarding show at Tate Britain.

The false walls in the main temporary exhibition galleries have been removed – to my memory, for the first time – leaving one enormous, open space. At first, it feels like a warehouse, filled with objects that you have to walk among and between. We are also walking through a career and a life, making our way as we will. But individual works soon take hold, and the proximities of her sculptures play off against one another and the exhibition space itself.

Similarity doesn’t mean sameness. Each of her cast mattresses and bed-bases has an entirely different timbre and feel. This is as much psychological as it is physical. Casts of sash windows and casements, interior and front doors (some with a letter-flap), are plays on differences as much as on their similarity as forms. The way her casting materials pick up the imprint of grain on a wooden floor, the muffled contours and planes of a painted door, dinks and dents, spalled plasterwork, soot stains in a fireplace, human and material imperfections, give each work character, even a kind of personality. The details are at once forensic and a reminder that everything that was once new gets worn down by time and accident, imprinted by human contact and use.

Beyond the galleries, Whiteread’s 100 casts of the spaces under chairs (made in 1995) march in rows down the first half of the Duveen sculpture court. In the rear half, Whiteread has selected a number of works from Tate’s collection – signalling affinities and friendships, artistic affections, kinship. Unexpectedly, Richard Dadd’s 1855-64 painting The Fairy Feller’s Master Stroke, a small window into the patricidal Dadd’s mental turmoil, hangs alone on one wall. All these works – including sculptures by Anthony Caro, Lynda Benglis and Sarah Lucas – do things Whiteread’s own art doesn’t. Outside Tate Britain, her white, concrete chicken shed shares a lawn with a Barbara Hepworth bronze. 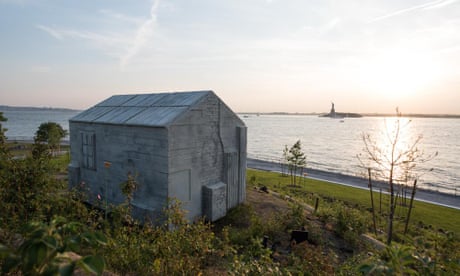 Back inside the gallery, the saw-tooth inverted stair treads of Whiteread’s cast stairwell climbs towards the trapezoid skylights. Nearby, light pools on an aluminium cast floor. Both these works refer to other spaces, other times.

Whiteread’s singularity rests in what is shared, the common space both of everyday objects and of art itself. As various as it is consistent, as metaphorical as it is material, her work insists on its volume and mass, its physicality and surface and absorption and resistance to light, reflection and refraction, shine and mattness, solemnity and sparkle and even colour – a multitude of off-whites, greys, ambers, yellows and a spectrum of Morandi-like dusty tints and shadows.

But still one asks: what does a window mean, or a toilet roll, or the space inside a room, a doorknob, or a humble hot-water bottle? A beehive or a chicken shed? Whiteread’s work often looks blank and literal, a fixed trace, like a snapshot, of an absent object, the space that once it occupied. We can never forget our passage through our surroundings, among the things we recognise and handle daily, often unconsidered and unmeasured, a familiarity that can suddenly turn into a threat and glower back at us. What Whiteread does goes beyond formal gambits or a repertoire. What she is really doing is making solid a volume of air.

• Rachel Whiteread is at Tate Britain, London, until 21 January.

… we have a small favour to ask. More people are reading the Guardian than ever but advertising revenues across the media are falling fast. And unlike many news organisations, we haven’t put up a paywall – we want to keep our journalism as open as we can. So you can see why we need to ask for your help. The Guardian’s independent, investigative journalism takes a lot of time, money and hard work to produce. But we do it because we believe our perspective matters – because it might well be your perspective, too.

I appreciate there not being a paywall: it is more democratic for the media to be available for all and not a commodity to be purchased by a few. I’m happy to make a contribution so others with less means still have access to information.Thomasine F-R.