Which of Picasso’s Muses Is the Art Market’s Darling? 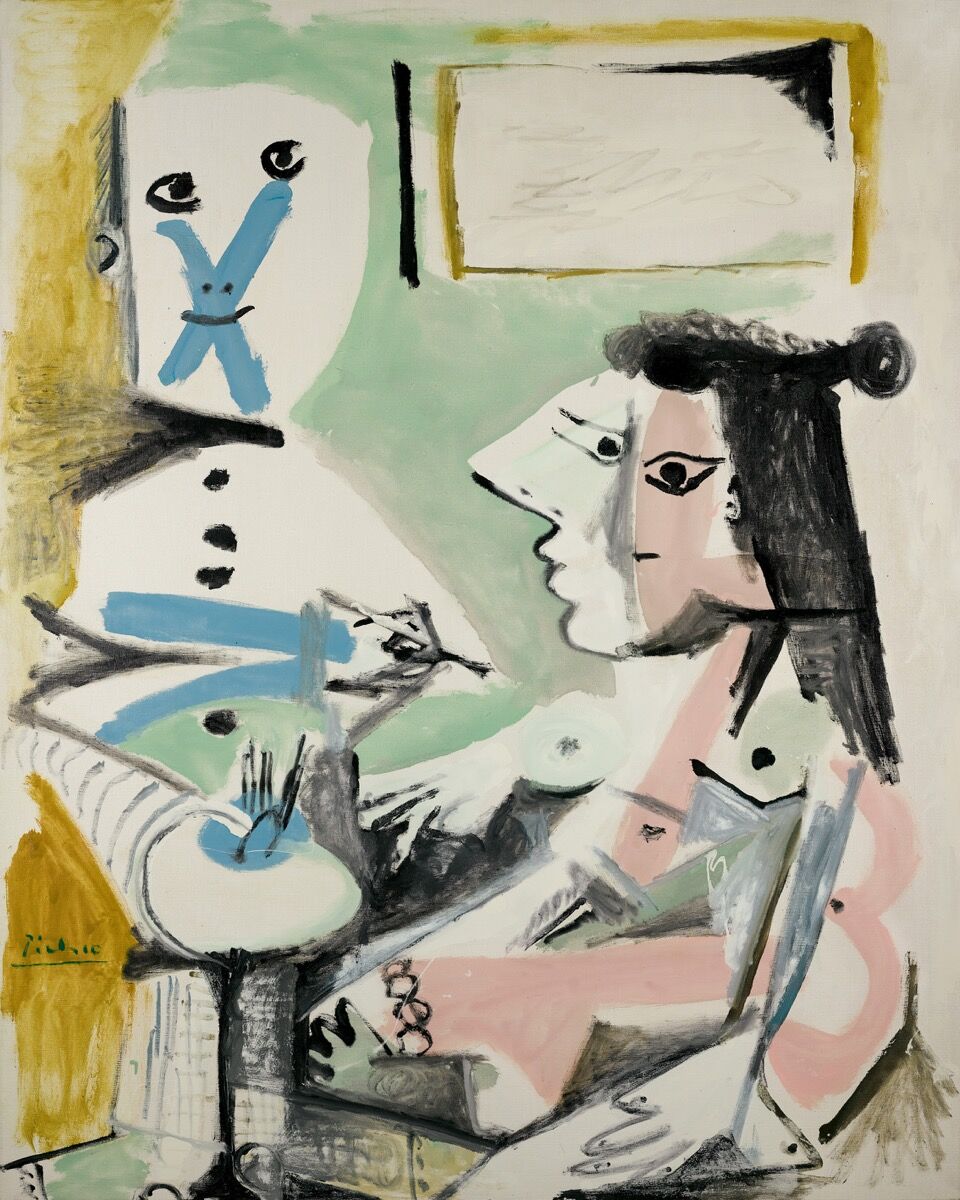 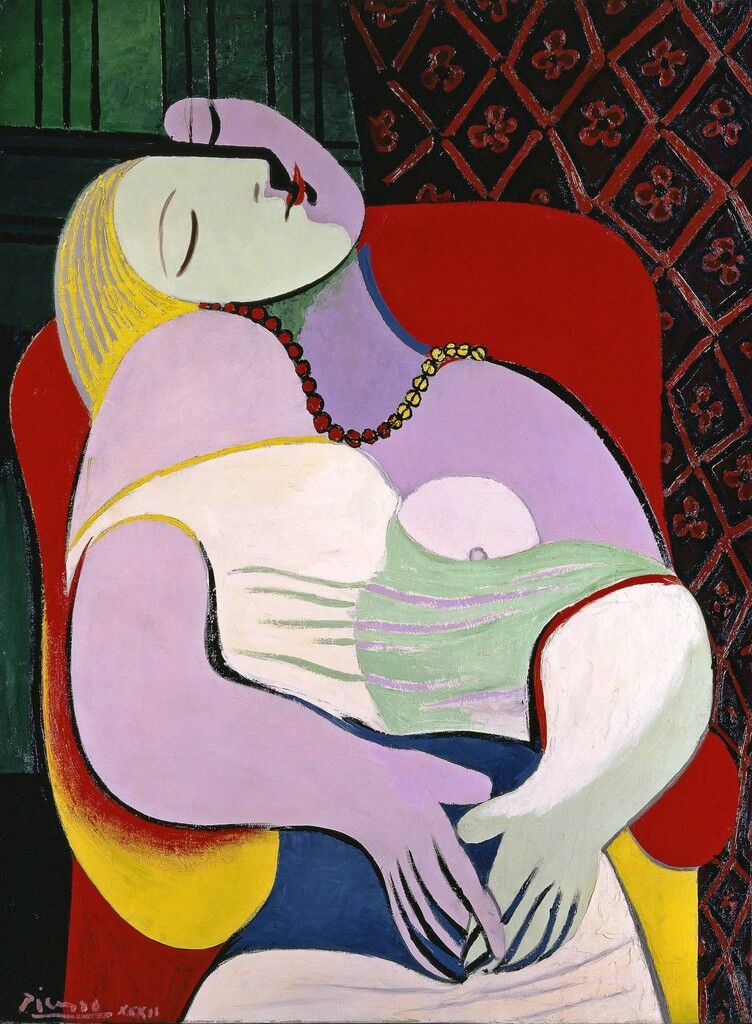 Pablo Picasso
The Dream (Le Rêve), 1932
Tate Modern
If you’ve been following the market for
Picasso

portraits lately, you’ve likely noticed colorful paintings of a curvy blonde woman either lounging nude or, when dressed, often sporting a beret with a pompom. The woman depicted, Marie-Thérèse Walter—increasingly referenced as Picasso’s “golden muse”—was one of several lover-muses the artist painted in his lifetime, yet Walter’s portraits in particular have recently been selling for record prices.

Already this year, Femme au béret et à la robe quadrillée (Marie-Thérèse Walter) (1937) sold for £49.8 million ($68.7 million) in February (all prices include buyer’s premium), while two 1932 paintings of a nude Walter sleeping, La Dormeuse and Le Repos, fetched £41.8 million ($57.8 million) in March and $36.9 million in May, respectively. Earlier this week, yet another Walter portrait, Buste de femme de profil (Femme écrivant) (1932) sold for £27.3 million ($36 million) at Sotheby’s.
An analysis of Picasso’s top 200 highest-priced works at auction showed that Marie-Thérèse Walter, is, in fact, the reigning queen of Picasso’s muse market, with higher average prices than Picasso’s other muses. What is it about Walter that makes her—or the art she inspires—so valuable? And what can we learn about Picasso’s art from studying his muses? 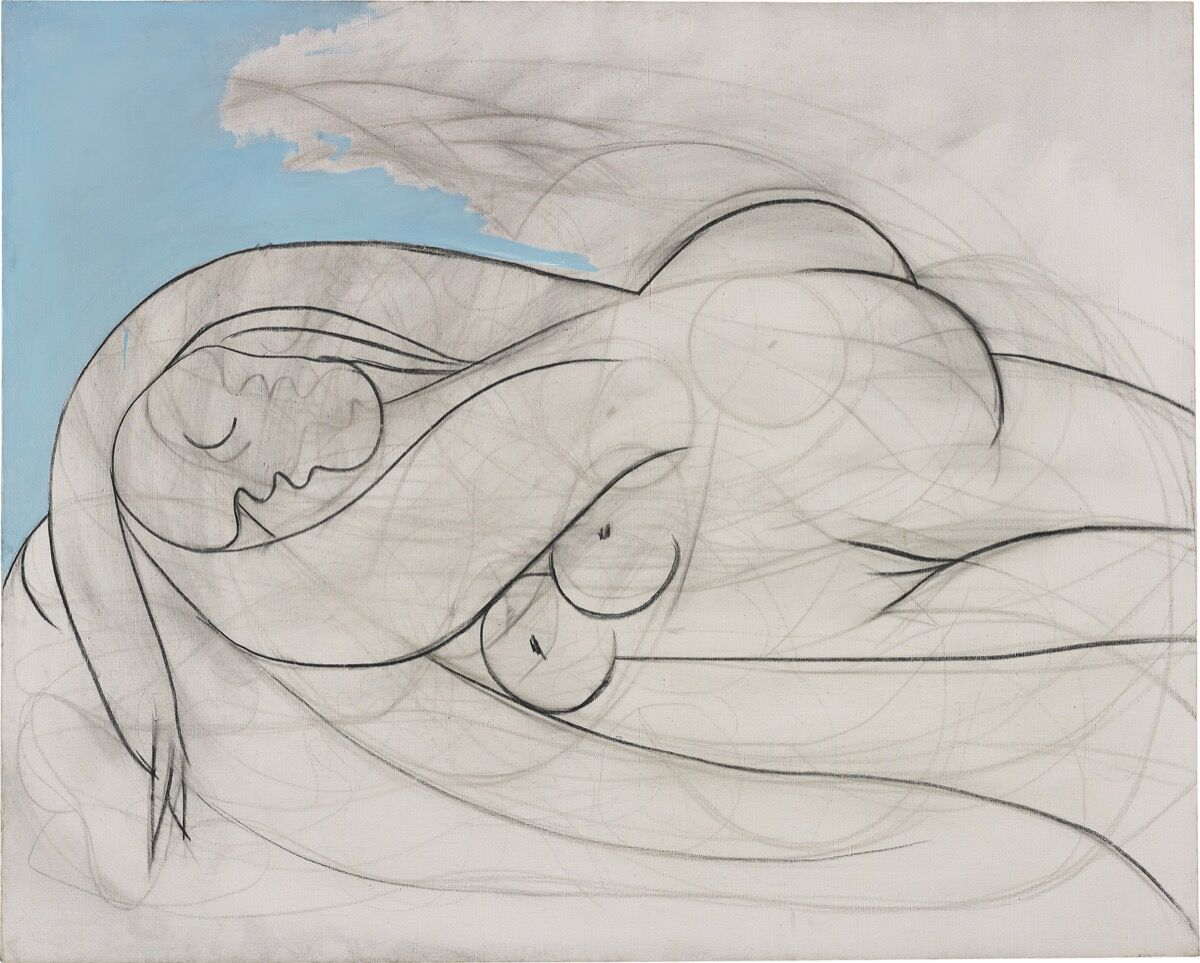 About half of Picasso’s top 200 auction sales are depictions of muses in various media, such as sculpture, paintings, or drawings. Six muses in particular were most important in the artist’s 91-year lifetime, according to Sotheby’s fine arts division vice chair, Brooke Lampley, each corresponding to a different segment of his career. In chronological order, these influential muses were Fernande Olivier, Olga Khokhlova, Marie-Thérèse Walter,
Dora Maar

, and Jacqueline Roque. To maintain pricing consistency, the sample was further narrowed down to 67 paintings with just one sitter.*

Why muses?
“Picasso was primarily a figurative painter, and his signature subject was a portrait of a woman,” Lampley said. “The muses are a way to chart the chronology in Picasso’s career in the period in time and style he explored, and which aspects of his biography are compelling to people in a particular moment.”
The term “muse” can have a variety of different meanings, depending both on who you ask and the artist referenced. “For Picasso, there was a perfect correlation between his muses and lovers,” said Keith Gill, head of the Impressionist and modern art evening sale at Christie’s. “For other artists, it’s not so clear.” He added that, much like the artist’s relationships with his muses, Picasso’s artistic styles had a tendency to overlap. 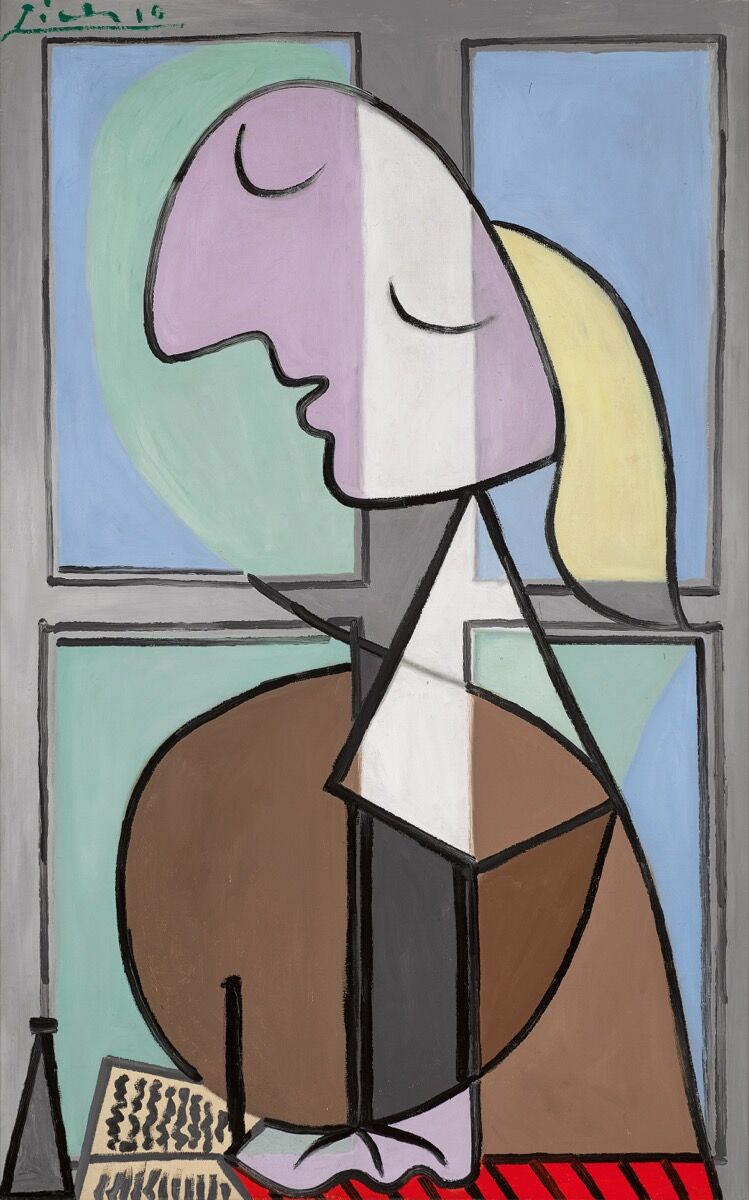 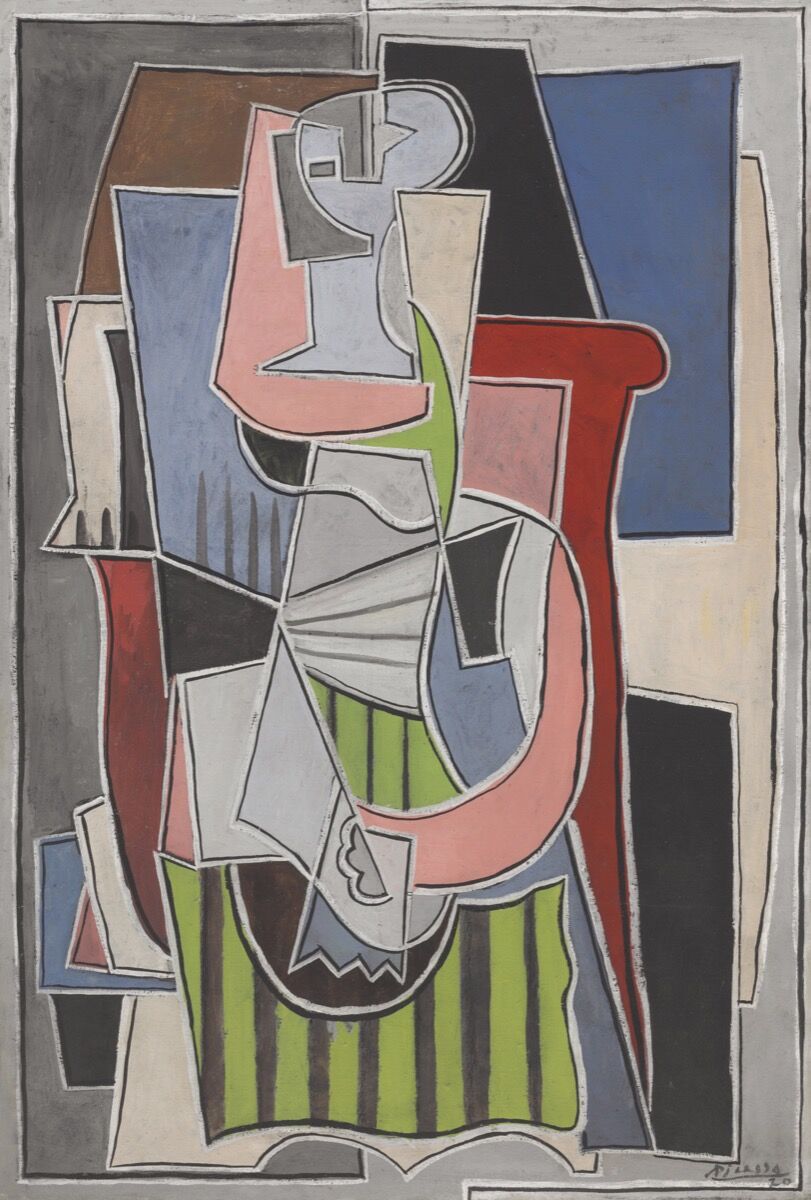 Picasso met his first muse, Fernande Olivier, in 1904, and their relationship lasted for several years, roughly corresponding with the artist’s Rose, African, and
Cubist

periods. Olivier is believed to have inspired many of Picasso’s Cubist works, including the groundbreaking Les Demoiselles d’Avignon(1907). But she’s not a popular face at auction: Of the top 200 Picasso works selling for the highest prices at auction, only two—Femme assise(1909), which sold for £43.2 million ($63.4 million) in 2016, and Demi­-nu à la cruche (1906), which sold for $7.9 million in 1997 ($12.4 million in today’s dollars)—are identified by the auction houses as portrait paintings of Olivier.

Olga Khokhlova, Picasso’s first wife, was a dancer with the Ballets Russes until she met the artist in 1917 and left the company. Many of Picasso’s portraits of Khokhlova are
neoclassical

Next was Marie-Thérèse Walter, whom Picasso met in 1927 outside of the Galeries Lafayette department store in Paris, according to Diana Widmaier-Picasso, an art historian and granddaughter of Picasso and Walter. “Marie-Thérèse had gone there to buy herself a col Claudine—a Peter Pan collar—and matching cuffs. Picasso approached her and said, ‘You have an interesting face. I would like to do a portrait of you. I sense we are going to do great things together,’” said Widmaier-Picasso. At the time, Picasso was 45 and still married to Khokhlova. Walter, who hadn’t heard of the by-then-famous Picasso, was just 17. Widmaier-Picasso described her grandmother as cheerful and athletic. “Curiously, such attributes depart from the usual image of Marie-Thérèse as she appears in Picasso’s paintings: as a reclining or, most often, sleeping muse,” she added. 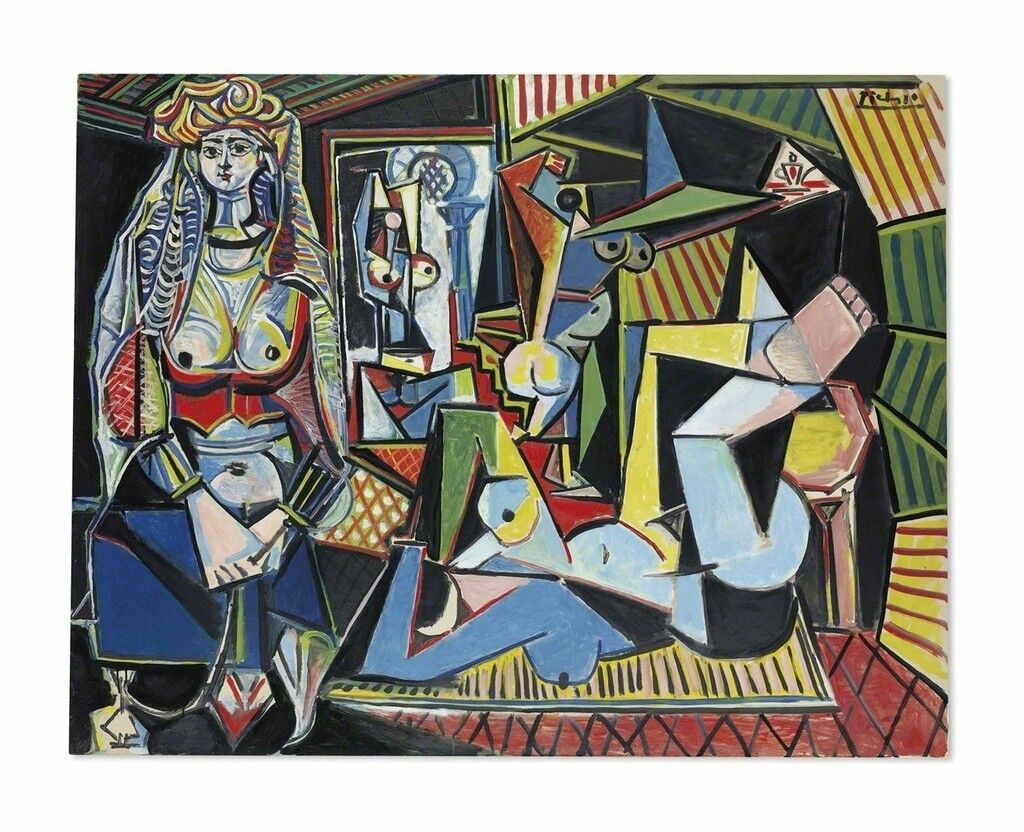 Pablo Picasso
Les femmes d’Alger (Version ‘O’), 1955
Christie’s
In the top 200 Picasso works, Walter’s 23 identified painted portraits far outnumber those of the other muses, with an average sale price of about $40.2 million in today’s dollars. Lampley pointed to the painting with the third-highest price at auction for a Picasso work, Nude, Green Leaves and Bust (1932), which sold for $106.4 million in 2010 (the equivalent of $122.8 million today), as “setting a benchmark for works of this period and driving great excitement.” Marie-Thérèse mania continued with the “Picasso and Marie-Thérèse: L’amour fou” exhibition at Gagosian in 2011—co-curated by Widmaier-Picasso—and persists today with portraits of Walter front and center in “Picasso 1932: Love, Fame, Tragedy,” an exhibition that closed at the Musée Picasso Paris in February and is now at the Tate Modernuntil September 9th.
“Certain collectors hold 1932 as an art historically important year,” explained Lampley. “Picasso was preparing for a retrospective, and these paintings were intended as a valediction, an epilogue of the retrospective.”
Le rêve (1932)—the painting of a sleeping Walter that appears on the cover of the “Picasso 1932” exhibition catalogue—last sold at auction in 1997 for $48.4 million ($75.8 million in today’s dollars), but changed hands most recently in 2013 for $155 million ($167 million in today’s dollars), making it the second most valuable Picasso work after Les femmes d’Alger (Version ‘O’) (1955), which holds the record-setting price of $179.4 million in 2015 ($190 million in today’s dollars). (Because Le rêve was last sold privately, its most recent auction price is the one configured in the aforementioned average sale price.)
In addition to the 23 previously mentioned portraits, Walter appears in several other paintings in the artist’s top 200 lots, including one where her face is clearly the basis for a bust in a still life, one in which she’s being rescued from drowning (where onlookers all also have her face), and a couple along with one of her sisters. Walter gave birth to Picasso’s daughter (and Widmaier-Picasso’s mother), Maya, in 1935. By this time, the artist had already met his next muse, photographer Dora Maar. 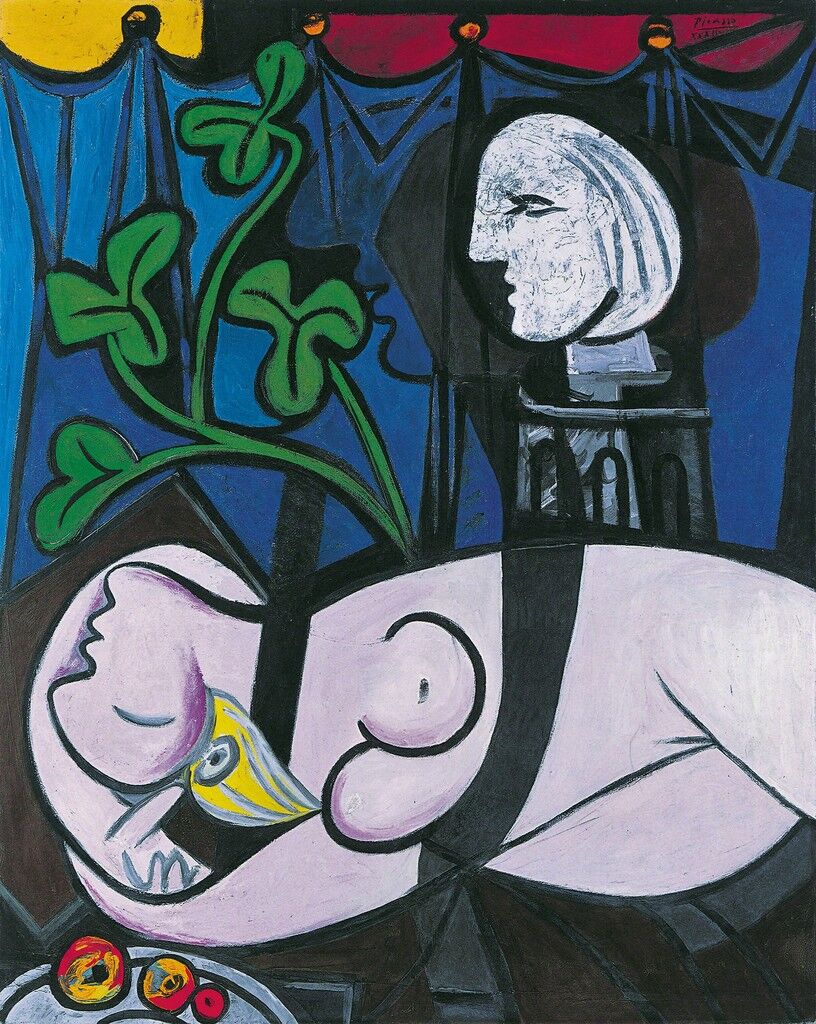 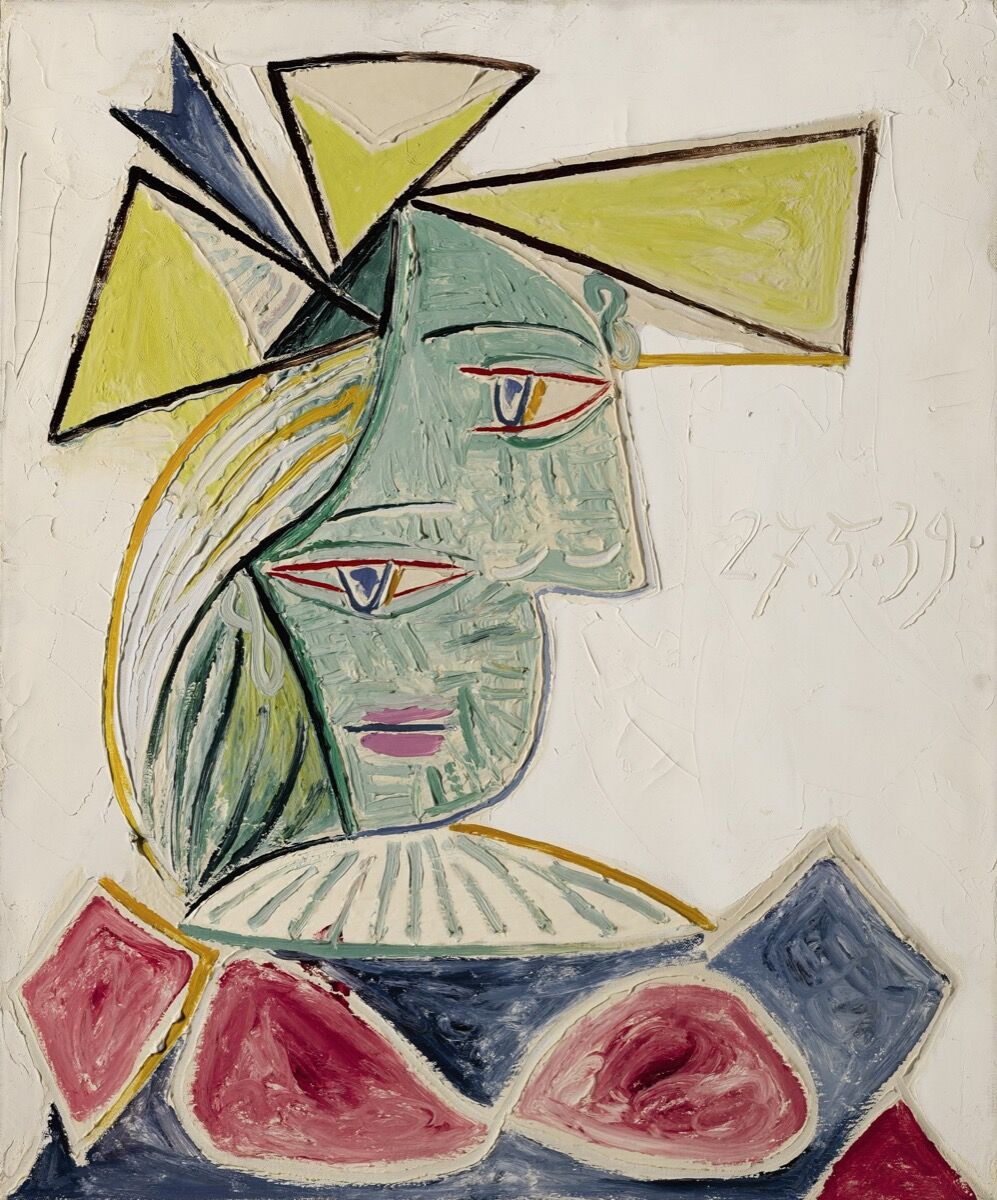 “Picasso’s creativity peaked between Marie-Thérèse and Dora Maar,” Lampley said, adding that this was a time of “incredible paintings and experimental change,” a parallel to the horror and drama surrounding World War II. Lampley noted that before Marie-Thérèse fever hit the art market, Maar was Picasso’s most popular muse, with “explosively radical and experimental” works selling for the highest prices.
“Dora Maar’s works were popular before, not only for the representation of the photographer, but also because it characterizes the period of Guernica, the artist’s masterpiece,” added Widmaier-Picasso.
Gill, however, argued that Walter hasn’t overtaken Maar in popularity, pointing to the “Picasso 1932” show as merely having raised awareness of Walter. As a result of the exhibition, more and more high-quality portraits of Walter are being drawn into the market. “It’s created the perception that Marie-Thérèse is the muse you want at the moment,” he said. “I wouldn’t say it’s a long-term change in the market. It just shows the strength of the broader market for Picasso.” According to Gill, Walter and Maar are tied for the top spot.
Among the top 200 Picassos, 18 are confirmed portraits of Maar, with an average auction price of $31.1 million in today’s dollars. The most valued of these, Dora Maar au chat (1941), sold for $95.2 million in 2006 ($118.8 million in today’s dollars), falling right behind Walter’s Nude, Green Leaves and Bust as the second-most expensive of Picasso’s muse portraits sold at auction. It’s interesting to note that because Walter and Maar overlapped as Picasso’s muses, the artist also painted joint portraits of them, as well as portraits of a single woman with a mix of both of their styles and features. For example, Buste de femme au chapeau (1939)—which sold for $21.6 million in 2017—fuses Walter and Maar’s faces and styles, Walter’s blonde hair with Maar’s signature wide-brimmed hats.
In 1943, Picasso met his next muse, 21-year-old Françoise Gilot, when he was 61 years old; the couple stayed together for 10 years. Of the top 200 Picasso works, seven are painted portraits of Gilot, with an average sale price of $15.5 million in today’s dollars. The most highly valued of these, Femme au chignon dans un fauteuil (1948), sold for almost $30 million in 2015 ($31.7 million in today’s dollars). It’s also notable that the oldest of these sales took place in 2009. Lampley believes that after the Walter fad has passed, Gilot—along with Picasso’s last muse and second wife, Jacqueline Roque—will rise to the title of the artist’s most popular muse. (“People should start buying now,” she said.) 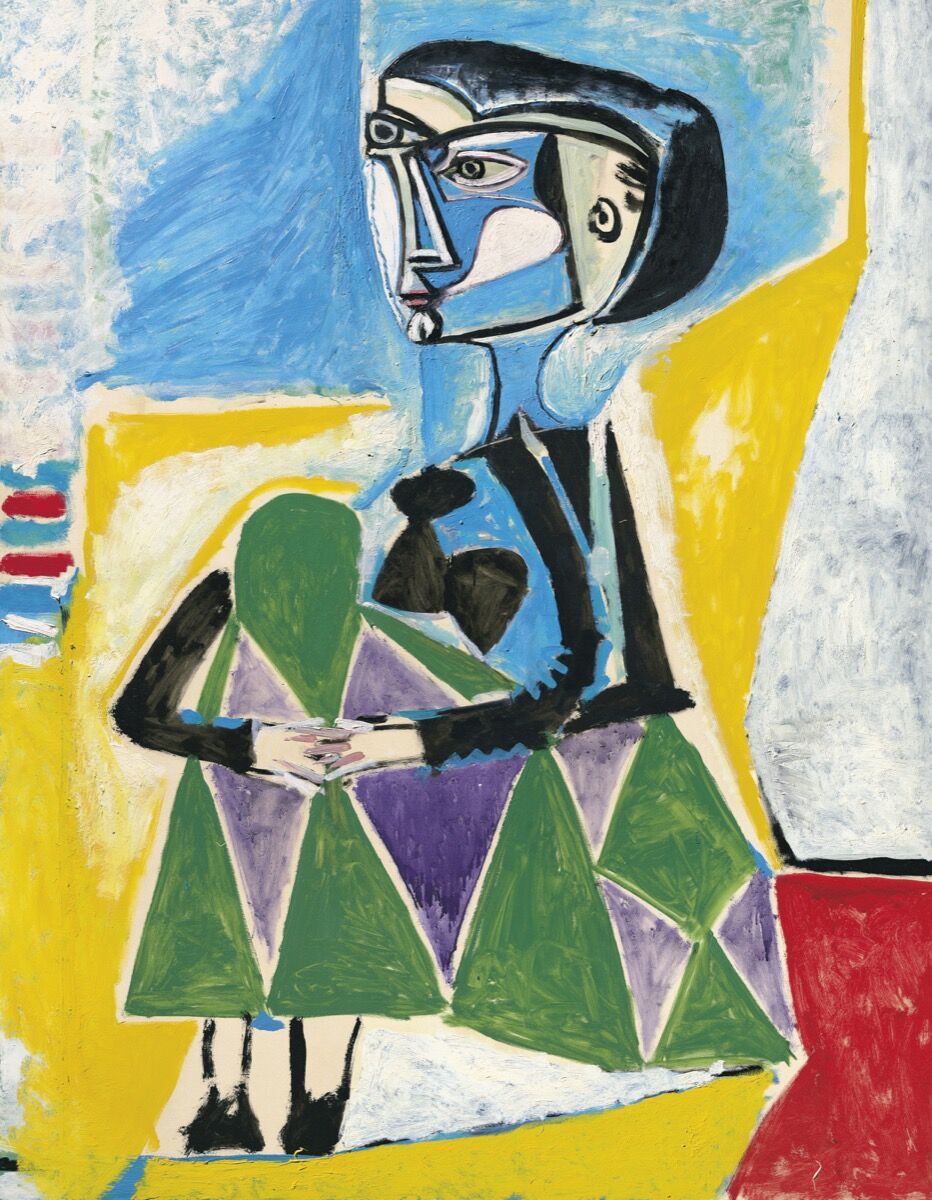 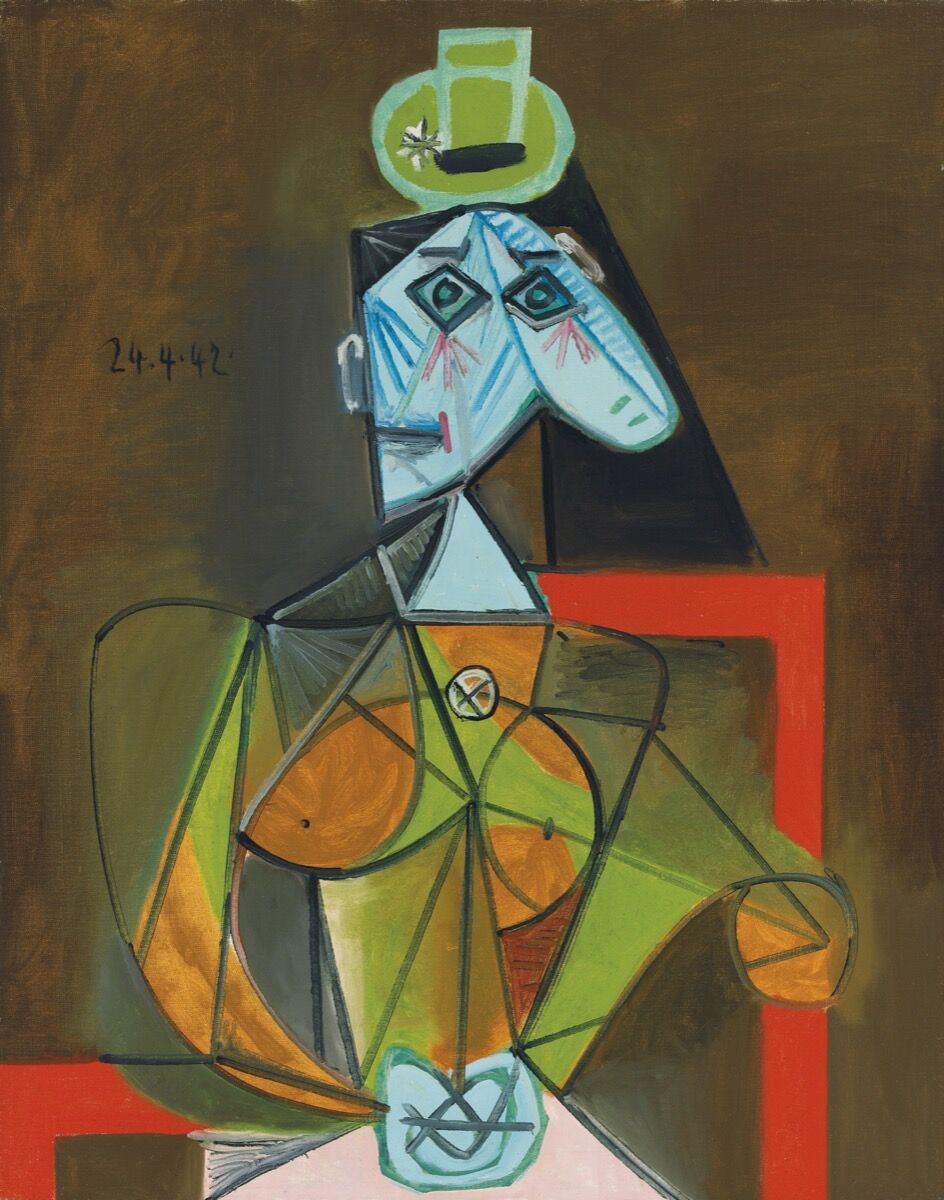 “The market is cyclical,” Lampley explained. “As more popular periods get scarce, quality works from less well-known periods are discovered.”
Picasso’s relationship with his last muse and second wife, Jacqueline Roque, lasted from 1953 (when she was 26 years old and he was 72) until the artist’s death in 1973. Lampley noted that people tend to think Picasso didn’t paint Roque as much, what with his obsession with musketeers at the time, but she argued that because he was with Roque longer than many of his other muses, the numbers are roughly equal. In fact, in the top 200 Picasso works, identified painted portraits of Roque appear 15 times, with an average auction price of $16.5 million in today’s dollars. Like the portraits of Gilot, these are fairly new purchases, with the oldest dating to 2007. Among these, the most highly valued, Femme accroupie (Jacqueline) (1954), sold for $36.8 million in 2017.
Also noteworthy are more than a dozen paintings in Picasso’s top 200 that include Roque with a musketeer, Roque in an embrace, Roque as model in the artist’s studio, and most famously, Roque in the artist’s well-known series “Les femmes d’Alger.”
In terms of market popularity at the current moment, Marie-Thérèse Walter takes the lead, followed closely by Dora Maar, with Françoise Gilot and Jacqueline Roque slowly gaining. The trend continued this week, with two new portraits of Walter and Maar breaking into Picasso’s top 200. The Walter portrait, Buste de femme de profil (Femme écrivant), sold for £27.3 million ($36 million) at Sotheby’s on Tuesday. The next day, Christie’s sold Femme dans un fauteuil (Dora Maar) (1942) for £19.3 million ($25.5 million).
“Picasso was a prodigious lover as well as a prodigious painter,” said Lampley. “His paintings are an exploration of art and women, and there’s an unquenchable appetite for his muses.”
Elena Goukassian