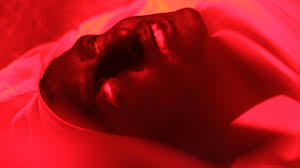 «Through drawing, performance, music, installation, and film, Pauline Curnier Jardin (b. 1980, Pertuis, France) crafts fictional adventures full of chance occurrences and wonders that nonetheless carry with them the potential for mishap or misfortune. Through lighting, color, texture, costume, soundtrack, and props, she creates transgressive, funny, and highly stylized visual settings that owe more to theater than to conventional narrative cinema. Curnier Jardin’s stories reveal a fascination with monsters, decorative objects, and animals, although her work expresses a particular awareness of the roles women have played in mythology, folklore, and conventional narrative cinema, roles that are commonly stereotyped as saint, witch, mother, or mystic.

Curnier Jardin supports a generous, intelligent, non‐systematic vision of continuity between human and nonhuman bodies—humans consume dirt, cave walls dance, a pear is covered with hair. While humans take on animal qualities, things take on human traits, such as love and longing. Usually associated with femininity and passivity, she looks to passion—traditionally opposed to «masculine» reason—as primary to sensations, perceptions, and the subject’s—or object’s—potential for action. More broadly, her work confounds the logic that divides human and nonhuman, rationality and emotion, sacred and profane, ally and enemy, masculine and feminine, showing instead how each is capable of interacting and combining.

By blending the sound and meaning of distinct words and mixing disparate ideas, characters, and environments, her work serves as a receptacle for new kinds of speech, new ways of using language, and new kinds of meaning. Her expansive «portmanteau» approach opens up possibilities for an alternative realm in which speaking is a fundamental fact about rocks and plants, animals and things, and where otherwise marginalized human voices, ethnicities, and desires have, in the words of filmmaker Ulrike Ottinger, «alternatives, possibilities, and the freedom to do wonderful things.» (excerpts of text by Alise Upitis, MIT List Visual Center, February 2014)

Pauline Curnier Jardin presents an installation: Explosion Ma Baby: A drum solo, fireworks, bells, streamer explosions, chants and a marching band set the quick pulse of Explosion Ma Baby. The film’s footage was shot at the same hour of the same day five years in a row during an annual procession. In the dolores space she will be showing a selection of work related to her current presentation at the Venice Biennale, Grotta Profunda Approfondita.

(b. 1980, France) is an Amsterdam/Berlin-based artist working across installation, performance, film and drawing. In 2008 she began creating a series of ‘movie-performances’ (Ah Jeanne!, LOV and TVO and The White Ferrals) which combine cinema and stage narrative. She went on to experiment with the format of an ‘objects optic opera’ (Le Salon d’Alone, 2010), as well as an ethnographic peep show (Ami [friend], 2010). Curnier Jardin extends her work with performance into her short films Grotta Profunda (2011), Hearts of Flint (2012), Bloodbad Parade (2014) and The Resurrection Plot (2015), the latter initially commissioned by RoseLee Goldberg and Charles Aubin as a live theatrical work that served as a central event in the 2015 Performa Biennial. Her work has also been presented at Fondation Cartier, Paris (2015); MIT List Visual Center, Cambridge (2014); Haus der Kulturen der Welt, Berlin (2013); Palais de Tokyo, Paris (2013); Centre Georges Pompidou, Paris (2012); Musée d’Art Moderne, Paris (2010), ZKM Museum of Contemporary Art, Karlsruhe (2010). She is currently on view at the Venice Biennial- Arsenale (2017). She is selected for the Prix Fondation d’Enterprise Ricard 2017, and will feature in the upcoming Frieze Film London, as well as in Fiac Cinephemere program, next to her presentation in Ellen de Bruijne Projects booth 1.H04.Pauline Curnier Jardin