It was announced in November with fanfare. Jeff Koons would donate a monumental sculpture, a hand holding a bouquet of balloon tulips, to the city of Paris to honour victims of the 2015 terrorist attacks here. The brainchild of the US ambassador to France, it was a gift the city could hardly refuse.

Seven months later, the project is caught up in delays. A private foundation has taken longer than it expected to raise the estimated €3.5m (£3.1m) needed to make and install the work, which is more than 40ft high. (Koons donated the concept, not the construction.) And although the plaza Koons selected for display of Bouquet of Tulips provides a view of the Eiffel Tower in the distance, the pavement isn’t strong enough to support the sculpture.

“It’s a very difficult work to install, it’s 30 tons, and at the moment we’re facing a lot of technical problems,” says Jean de Loisy, president of the Palais de Tokyo, one of two contemporary art museums that share a building and the plaza where the sculpture is expected to land permanently in the city’s 16th arrondissement.

He said that he appreciated the project and Koons’s art but was reluctant to alter underground exhibition rooms by installing pillars that would support the sculpture. Still, despite the complexities, De Loisy says he is “very confident” the problems would be resolved. 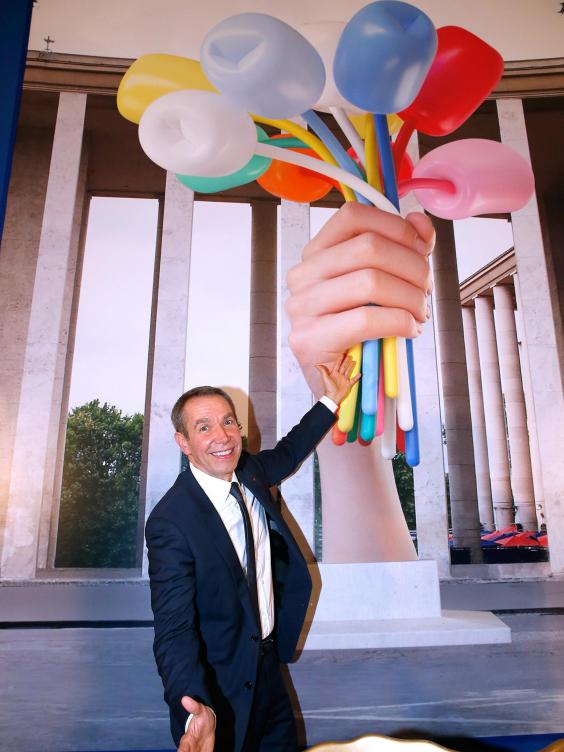 Koons offering the ‘Bouquet of Tulips’ to the City of Paris, which is yet to be installed in the plaza in front of the Museum of Modern Art and the Palais de Tokyo (Getty)

The gift was arranged between the former US ambassador to France and Monaco, Jane D Hartley, and the mayor of Paris, Anne Hidalgo, to honour French-American friendship and to help boost tourism in a city that lives with the constant threat of terrorist attacks. The announcement was rushed in November, before Hartley, an appointee of President Barack Obama, left Paris, but also before the permits and approvals had been worked out.

Some in French cultural circles contend that the sculpture was practically foisted on the city; they have called it more of a coup for the artist and his private donors than for Paris.

“They presented this bouquet as a symbolic present to Paris, but then we realised it wasn’t exactly a present, since France had to pay to install it,” says Isabel Pasquier, an art critic at France Inter, one of the country’s leading public radio stations. “Whether you appreciate his art or not, Jeff Koons is a businessman, and we quickly understood that he was offering Paris to himself as a present.”

A kind of omertà has fallen over Paris about the project: few art critics or curators would speak openly about it even if privately they said they found the sculpture in poor taste. (They say they don’t want to offend the former US ambassador, the city or François Pinault, a collector of Koons’s work and one of France’s most powerful businessmen and art patrons.)

Fabrice Hergott, director of the Museum of Modern Art of the City of Paris, which shares a building with the Palais de Tokyo, says he welcomes the sculpture, which he hopes will draw more visitors to the museums. “It’s a nice project,” he says.

“It speaks to our era. I think it will be much less kitsch in several years and people will find it very appropriate for the location.” 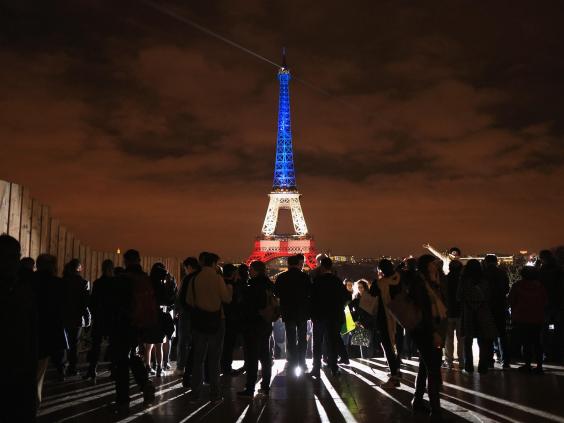 The Eiffel Tower is illuminated in red, white and blue in honour of the victims of the Paris terrorist attacks in November 2015 (Getty)

The project could also be a new frontier for Koons. “It’s superconceptual,” says Judith Benhamou-Huet, a French art critic and blogger, in that “he’s giving the concept but not the realisation”. She compares the approach to that of Sol LeWitt, who sold wall drawings that buyers then executed on their own.

The city proposed several other sites to Koons, but some had structural or aesthetic challenges. He chose the one in front of the contemporary art museums for its symbolic value. The plaza is not restricted by historic preservation provisions.

De Loisy says he has been consulted ahead of time – to a point. “Of course they asked me,” he says at an art opening at the Palais de Tokyo for the exhibition Dioramas and several other shows. Asked if he had a say in how to respond, de Loisy grew silent and smiled. Asked if his silence was a no comment, he replied, “Just silence,” and smiled again.

A spokeswoman for the city administration says she expects the project to move forward but would not rule out finding a new location if the current one proved too complex. “In life you can’t rule anything out,” she says.

France’s culture ministry is overseeing the logistical studies and permits, which have not yet been issued. The ministry did not respond to repeated requests for comment. Some delays are expected because a new culture minister and team were put in place after President Emmanuel Macron was elected last month.

In a statement, the US embassy in Paris says it is “not currently involved in this project, although the embassy welcomes the mayor of Paris’s strong support expressed at the project’s unveiling at the ambassador’s residence last year.” It adds: “The project exemplifies the strong cross-cultural ties between our two nations and has not caused any strains between the US and France.” 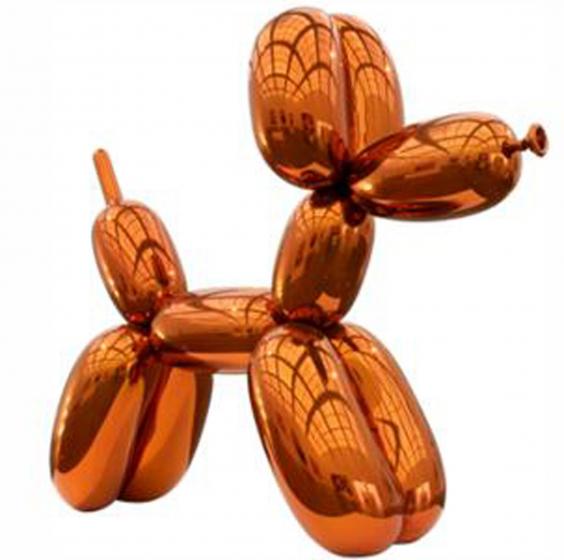 Fonds Pour Paris, or Funds for Paris, a foundation that seeks private money for public projects in the city, is overseeing the fundraising. “We have the €3m we need for installation,” says Anne-Céline Delvert, the foundation’s deputy director. She says it is looking for a private enterprise to donate the anticipated €500,000 in construction services. The work can begin once permits are issued.

She says she hopes the sculpture, which is being made in Germany, could be installed this year or in early 2018. On the timing, “we’re being prudent”, she says.

Emmanuelle de Noirmont, Koons’s French gallerist, says the private funds came from French and American companies. She says that she would not name them until the culture ministry issued the approval to move forward.

Now that she is a private citizen again, Hartley, the former ambassador, says she plans to donate personally and that she is also helping with fundraising in New York.

She says Koons has been talking up the project in New York, sharing images of Bouquet of Tulips at a recent dinner party. “He passed around his cellphone – he had the photo on his cellphone and people were so excited,” Hartley says.

That sentiment is not universally shared in Paris, where some welcome the delays and even wish the project would just disappear. “I’m not in a hurry,” says Pasquier, the France Inter art critic.