One and One Is Four: The Bauhaus Photocollages of Josef Albers 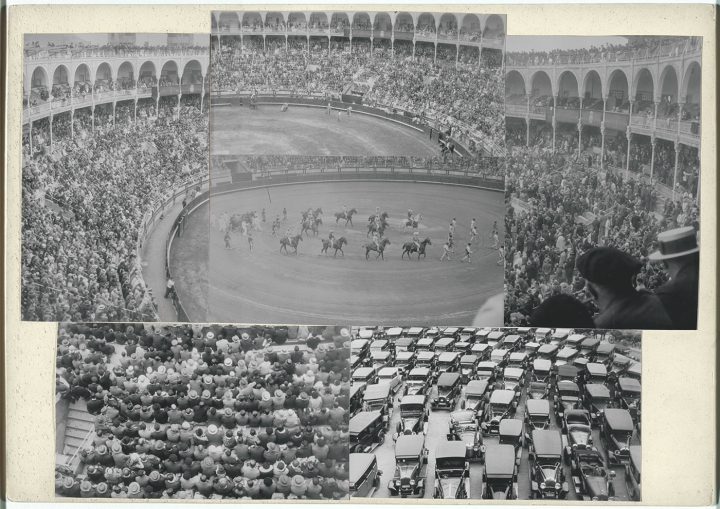 In his only lecture on photography, Albers warned students against approaching photography carelessly, and the collages he made of his own photos show how he put that mantra into practice.

Albers spoke those words on Feb 24, 1943, about a decade after he had finished a series of his own photographic work that exemplifies this belief — a series rarely seen, created in a medium for which he is not very widely known. It consists of 70 photocollages; made between 1928 and 1932 — the year before he moved to the United States — each one presents at least two black-and-white photographs mounted to a cream-colored, A3 board. Although they capture quotidian subjects — portraits of Albers’s family and friends; pictures of mannequins, stairwells, the beach, the Eiffel Tower — the carefully constructed collages meld the mechanics of then-young, handheld Leica cameras with the artist’s hand, representing the unity of art and technology inherent to the Bauhaus.

For the first time, the collages are now all published together (some have never been printed before) by MoMA Publications, collected in One and One Is Four: The Bauhaus Photocollages of Josef Albers. The book accompanies an ongoing, eponymous exhibition of the works at the Museum of Modern Art, which was the first to display Albers’s photographs in a 1988 show curated by John Szarkowski. The photocollages first emerged in the 1970s, part of a hidden trove of Albers’s art found in a New Haven storage room, unlocked after his death with the supervision of Anni Albers.

Albers had never spoken of, written about, or exhibited his photocollages, and it remains a mystery why exactly he mounted these works (in an accompanying essay, MoMA curator Sarah Hermanson Meister posits, among other reasons, that they may have been intended as gifts). But close examination of them, especially together as a collected body of work, suggests that they provided a space for experimentation with the same concepts that Albers continued to focus on in his paintings, such as seriality and how varying tones may shift perception. His renowned Homage to the Square series, for instance, which began in 1950, engages with similar concerns, most obviously with the subtle shifting of rigid forms to create different compositions.

“[G]rids and rectangular forms — suggesting building and framing — are also a through-thread in Bauhaus work, in photocollage and in other mediums,” as art historian Elizabeth Otto writes in another essay included in the publication. “In Albers’s work, the structure of the photographic frame offers a calmer, more contemplative visual space in which to explore narrative, perspective, time, and the nature of photographic representation itself.”

Over his three decades of teaching, Josef Albers delivered just one lecture on photography. Addressed to students at Black Mountain College, “Photos as Photography and Photos as Art” began:

I suppose some of you have seen the advertisement of commercial photo dealers saying, “You push the button, and we do the rest.” This promotes a taking of pictures with the least care possible. Such a way of looking at photography, I believe, is of the lowest level possible and should not be our way of approaching and understanding photography.